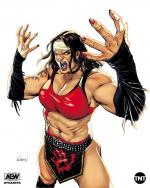 Both Dark and Dynamite were great again! Loved in particular the Kip,Penelope, Joey match.

Only a bit dissappointed that the womens champ didn't make a appearance or watched the match or had any Segment to build some storylines and further everyones characters. Only mentioning the match between her and Kris is not enough.

I think that number represents her inexperience pretty well. In comparison, Charlotte has wrestled for around the same number of years and she currently has 860 matches under her belt.

and even after 860 Matches while Keep being shoved into our throats by going from Championship to Championship because they want her to surpass her fathers record of Holding titles 16 times, she still doesn't have a good in ring psychology and even when she causes a concussion to someone, she keeps ruthlesly going because "the Show must go on" like in Kairis case. If it hasn't been for Asuka and Becky that noticed and protected Kairi, Charlotte would probably had picked her up again and delivered another kick on her head or put her through another table.

What I want to say by that is that Talent and skill always differs. You can have 40 Matches under your belt and be a great Wrestler while others can have 200 and still not be as good as you.

It's just a example thought. Don't mean the Charlotte is a bad Wrestler by that and mistakes can happen to anyone.


She wrestled about 25 - 30 matches each year. It's not like there was a year or two that took a significant dip. The number of matches per year stayed consistent.

Like I said, I know that she started Training in 2012. How many Matches she did per year I can't tell since I wasn't able to watch every match of hers. Also don't know how accurate the cagematch Profile of hers is and if any Matches are missing or not.

What I know is that she is good in the ring for the time she is a wrestler and she has the Charisma as also the mic skills she needs to be successful.

) and she tries to hone her craft more and more and that's always a good thing in my opinion.

They just need to put more focus in the womens division create good feuds and storylines as also book good matches so their roster can really shine.

^ Completely agree. She hasn't left much of an impression on me so far.

She is not green, she has been Wrestling for 8 years now and had several great Matches around the world.

She's has a total of 166 matches listed under her cagematch profile -- that's not much for someone who's wrestled for 8 years.

I just know that she started training back in 2012.

She is not green, she has been Wrestling for 8 years now and had several great Matches around the world.

I wouldn't also compare her to Nia cause I would agree that even Nia is getting better, she is still  green compared to Nyla.
Also Nyla had to work her butt off around the world at the indies training hard to hone her craft without having a huge WWE PC Center behind her to help her.

What "Dangerous" spots do you mean?
I only know about a mishap once with michael nakagawa that looked akward and in the big battle royal when she tossed priscilla to the outside though in her case it was more a bad Landing the cause because the others didn't catched her at all and she dropped hard.

The problem with Shida is the same as with Riho, Emi and Yuka.

That's why they finally took the title from Riho and gave it to someone that can be on AEW weekly.
This way they can build the division around a champion that can be there the whole time so they can create storylines around her and push the division further.

If she's not green, than she's certainly sloppy. You've also listed several examples of her being sloppy/dangerous in your post, I remember there being some not good spots in the first match with Riho as well.
Having the PC or not, she's in a much bigger position right now than her talent would allow for. I'd rather see her work with people like Emi Sakura in lower tier feuds for the next year and work on polishing herself up before getting a big title run, instead of being in the title pic instantly.

If you wanna link some of these apparently amazing matches, I'm down to take a look and potentially change my stance, but apart from her most recent Riho match, I don't think she's done anything remarkable in AEW.

Well to be fair everyone has a sloppy Moment or a botch here and there, I've seen it Happening in every Promotion and even the best wrestlers in the world. It's not as if she were a botch Maschine or has injured anyone. In fact, Riho herself were pretty sloppy in a few Matches in AEW and in stardom.

Anyway, here a link to a match I consider a good match (everyone has a different view or expectations in a match after all.

Another match of hers that I liked.

and a nice tag Team one

There are some Matches of her on YouTube and dailymotion as also elsewhere.

Some are very gimmicky(Japan), others just "ok" Matches (US and wherelse) and some are good in my opinion.

Shida moved to America in October and usually posts a pic from AEW every week.

Must have missed that.

Hope she will get more involved in the title picture now then!

For now it's Nyla vs Kris at AEW Revolution(Title Match!