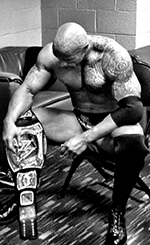 The era of THQ wrestling games is over. Sources have indicated to IGN that the WWE game franchise will be sold to Take Two, parent company of 2K. Terms of the sale are unknown at this time, as details have not been finalized. These negotiations appear to have taken place outside THQ's formal auction process.

This news comes as THQ assets have been divided among several different publishers, pending court approval.

For more on WWE games, and THQ's future, stay tuned to IGN - official announcements are expected as soon as tomorrow.